From the first sentence, Perman grips her readers with this masterful tale.

A Grand Complication is a rollicking ride through history from the opening scene at Sothebys described with such detail that I am there, nervously waiting to see who will own this almost mythical creation ....The watch, beautifully described as Patek Phillipe's magnum opus, is the result of two dueling personalities obsessed with wealth, and obsessed with each other. Their lives and lifestyles are shockingly privileged. The level of detail is so precise that by the time I have reached the last page, I feel as if I've found a peephole into a history of wealth and obsession. I can almost hear their voices, smell their perfume, and see the machinations behind their quest to be considered the richest and most powerful. Intricate and luxurious, A Grand Complication is much like its subject matter timeless or rather, very much on time, intriguing, and quite complex. A must read.

Passionate collectors of complicated pocket watches may remember that the most expensive watch ever sold at auction, for US$ 11,002,500.-, was lot No. 7, at Sotheby’s in New York, on 2 December 1999, a one of kind, ultra complicated pocket watch, bearing the number 198 385, completed 1932, made by Patek Philippe, Geneva. That watch features 24 additional ‘complications‘ beyond keeping time. It was made especially for the New York banker Henry Graves Jr., who had specified in great detail what functions the watch should perform and how it should look.

The book under review opens with describing the scene at Sotheby’s that afternoon - and then takes some 300 pages to examine and describe how a market for a significant number of this kind of technology driven, ultra complicated watches developed in the United States in the first three decades of the 20th century. Its author is a New York based, business journalist, who in 2009 (on occasion of the 10th anniversary of the auction) wrote an article on the subject for Business Week, but discovered that the story was better suited for a book length piece than a few pages in a magazine.

The ‘Graves Super Complication’ represents the endpoint of a decades' long, intense competition between two American business tycoons, who both – though of vastly differing style and temperament – are a product of their time, characterized by boundless optimism, belief in technology, and the excesses that resulted in the great depression. Ward Packard from Ohio, the self made founder of the Packard luxury brand of automobiles, and Henry Graves of New York, born into a moneyed banking dynasty, both developed an infatuation with high-grade, complicated timekeeping mechanisms. Both started ordering bespoke, custom built complicated watches made in Switzerland (primarily by Patek Philippe).
The author spins a captivating story describing the ‘arms race’ between the two protagonists to not only dream up ever more complex watches, but to actually have these machines produced in steel and gold.

Perman writes a suspenseful book, but is obviously more at ease in analyzing the social, cultural and financial angles of the story, than delving into the technological/horological nuances of the mechanical wonders that she writes about.
The reader interested primarily in the physical objects, their function or how they were designed and made, will be richly rewarded with countless fascinating morsels of horology (and occasionally be annoyed by misquoted or misunderstood details) even it the heart of the book is a social commentary and not a book about complicated watches. Readers who are horological collectors however may find Permans’ descriptions of and insights on the contemporary auction market for watches of interest. 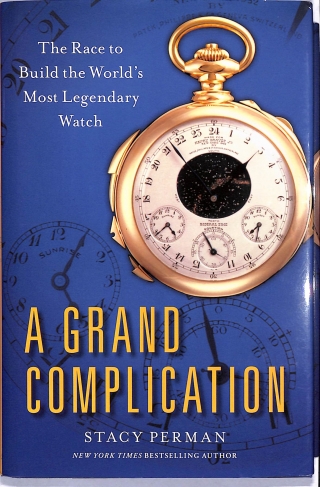