At the end of 1929 the director of the Musée Galliéra in Paris announced that a new star had appeared in the watchmaking firmament: the watch without a winder, the watch that winds itself.
In this book, Alfred Chapuis highlights the major difficulties he encountered in the preparation of this book. It was a painstaking task to bring together everything that existed but was scattered and it is thanks to this book that the history of the old automatic watch has been preserved.

This book describes this important chapter in the evolution of watchmaking with precise data, recalling the names of those who contributed to its launch and success.  The first attempts at the so-called perpetual watch date from 1770 and the story continues with the precursors such as Abraham-Louis Perrelet, Abraham-Louis Breguet, Louis Recordon, Jaquet-Droz & Leschot, James Cox and various masters from the period 1780 to 1825.

The story continues with the beginnings of the self-winding wristwatch, which became established with the introduction of the wristwatch. An important turning point was made by Hans Wilsdorf of Rolex, who is considered the apostle of the waterproof watch.

The final word: the automatic watch will undoubtedly become a universal watch. 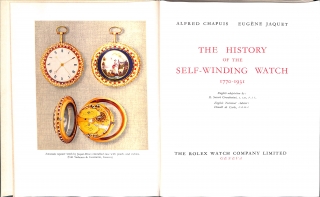