One of George Daniels’s central contributions to horology is his co-axial escapement. Having observed that the dominant lever escapement begins to change its rate after a year or two - a disturbance caused by the sliding action of the impulse elements of the escapement - Daniels set about developing a mechanism that avoided this problem.
The result of his efforts was the co- axial escapement, a mechanism in which he sought to combine the strengths and eliminate the deficiencies of existing watch escapements, the lever escapement foremost among them.
First devised in 1977, today it remains largely the same as fitted in watches of Daniels’s own manufacture, as well as those of several wrist-watch manufacturers.

Details the workings of the practical watch escapement
Text is free from technical jargon, accessible to all, and accompanied by numerous line drawings to help the reader
New edition with 129 b&w illustrations. 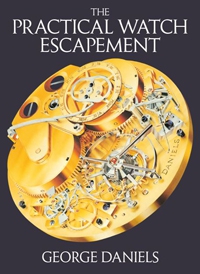