8855 - The Majesty of the Chinese-Market Watch


The Life and Collection of Gustave Loup of Tientsin and Geneva.
Watch Dealer and Collector (1876-1961).

The Chinese made complex water clocks in the 11th century, but, unlike clockmakers in Europe, did not develop horological technology further. Fascination with timepieces experienced a renaissance with the arrival in the 16th century of Jesuit missionaries bringing gifts including clocks.
They were followed in the 17th and 18th centuries by English traders bringing ever more eleaborate clocks and watches, a trade which reached its apogee with the elaborate creations of the London jeweller James Cox and his contemporaries in the latter half of the 18th century.

This important publication charts the history of a remarkable nineteenth century phenomenon—the Chinese market for the finest horological artefacts—and the life and times of the key European collector and dealer in that market, Gustave Loup.
In the chaos following the 1899-1901 Boxer Rebellion, Loup (Chinese-born and fluent) benefited greatly from the depressed values of the exquisite gold, enamelled and jewelled timepieces that the Swiss had exported over the last century into a previously buoyant Chinese market. Living in China, Loup assembled a fabulous collection, but his fortunes later waned, back in Switzerland in the 1930s, and bankruptcy saw the collection broken up. This book charts his remarkable life, the market in which he operated, and examines in detail over 100 of his best pieces. Julia Clarke, the internationally acclaimed Sotheby’s expert in gold boxes, enamels and automata, has contributed the chapter on the ‘Geneva Fabrique’, and co-authored with Ian the section on ‘bijouterie’ from the Loup collection.

The book has 384 pages, with over 280 illustrations, mostly in colour, casebound, 270mm x 210mm, in a buckram cloth cover on art silk paper, with head and tail bands and silk ribbon, and a printed dustjacket. The book is extensively annotated, and has both a detailed bibliography and an index. 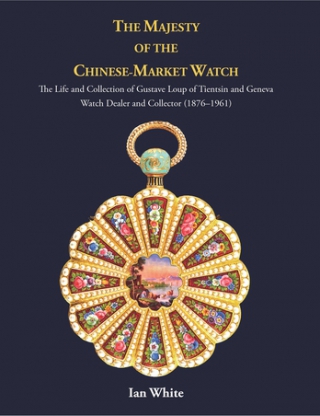